Displaced within a city: COVID-19 and repeat evictions in Lagos’ slums 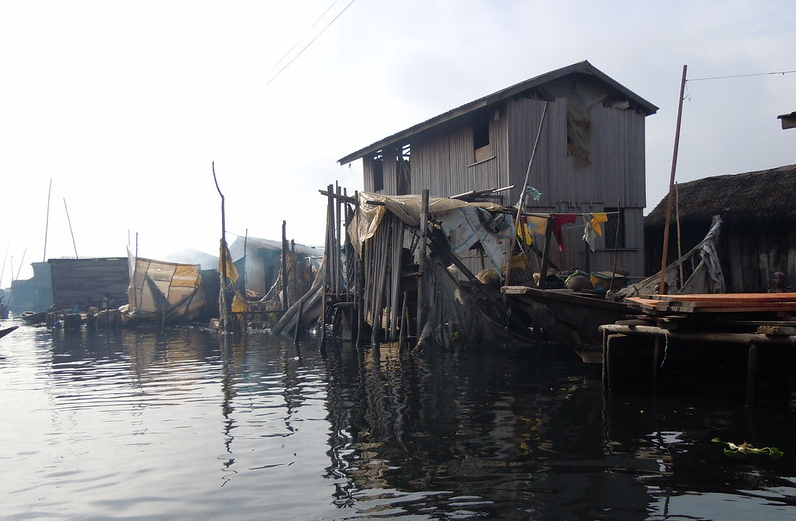 There are over 100 slum and squatter settlements in Nigeria’s largest city Lagos. Taibat Lawanson, professor of Urban Management and Governance at the University of Lagos, visited five such communities as part of a Prindex study on land and housing rights and writes about her experiences. This opinion piece was first published on Reuters Trust.

We found that displaced people are the most vulnerable

Many of the 100,000 Chibok people living in Lagos came from IDP camps in Northern Nigeria after fleeing the Boko Haram insurgency. There are pockets of these migrant communities in self-built temporary settlements all around the city. We visited one of the largest – Owode Mango – a line of temporary shacks that run alongside the Lekki-Epe expressway.

The people living here are either paying rent, staying for free in exchange for guarding a property, or squatting. In all cases, they face constant harassment, demands for protection money or illegal ground rent, and difficulties accessing basic public services.

The pandemic has made their situation far worse. Many slum dwellers were forced to beg in wealthy neighbourhoods just to survive, risking arrest for breaking the lockdown.

Struggling landowners also had to sell their plots to raise cash. In many cases, the Chibok people living on the land were given just 24 hours to vacate their homes, irrespective of their rights –some were violently removed.

Displaced people tend to fall between gaps in Nigeria’s social policies and generally lack the networks, money and political leverage to demand justice. Even though the Chibok are citizens, they couldn’t challenge the evictions due to their IDP status.

“We are not from here,” explains Amina, a woman who has been evicted twice under similar circumstances. “People can do whatever they want to us; we are at their mercy.”

Women living in slums tend to work in the informal economy – jobs like street trading, hawking or domestic work that became impossible during the lockdown. This sudden loss of income put female-headed households at high risk of homelessness.

The Prindex global survey furthermore finds that women in urban areas in sub-Saharan Africa are more likely to experience tenure insecurity than their counterparts elsewhere in the world.

Support to cushion the effects of the lockdown from the state of Lagos was distributed by male-dominated community development associations and reached just one of the five communities we visited. While the burden of caregiving tends falls on women, covid relief (especially food) went to their typically male political allies.

As a result, women who head households were forced to use their savings to feed their families. After the restrictions eased, many had nothing left to restart their businesses and send their children to school.

This crisis highlights that emergency management strategies need to be adapted so that the needs of the most vulnerable (including women) are prioritised. These needs include access to basic education and primary health services.

People can get ‘displaced’ within a city

In waterfront communities, we spoke to families who have been forced from their homes multiple times because they live next to luxury real estate. These evictions also cut fishermen off from their work. After losing their mooring posts, many ended up squatting in nearby shacks unable to earn a living.

In all the communities we visited, we encountered many residents who have experienced repeat evictions. This pattern illustrates the precariousness of displaced people (even within a city) and the difficulties of regaining solid tenure rights once they have been stripped away.

In the end, moving people on won’t solve the problem, it only serves to expand and proliferate informal settlements – with devastating consequences for the people involved.

Cities are always evolving, but change can be managed in a way that gives people dignity and a chance to enjoy a secure home elsewhere. At a minimum, evictions should conform to international agreements and respect human rights.

In Lagos, the state government is currently developing resettlement guidelines and other policies to guide urban renewal. As part of these discussions, officials should consider a rights-based approach to city planning to safeguard women, migrants and those living on the margins.

At the national level, debates about sustainable ‘future cities’ should factor in tenure security, especially for the urban poor. Urban renewal and land reforms must go hand in hand with public health and social development.

After two, three or more evictions, the people we met had almost run out of hope. But beyond this terrible human cost, pushing the ‘problem’ downstream just isn’t sustainable. Lagos’ slums continue to expand, which brings with it an environmental and social cost. Ultimately, people are what make a city great – and with secure rights, people can do great things.