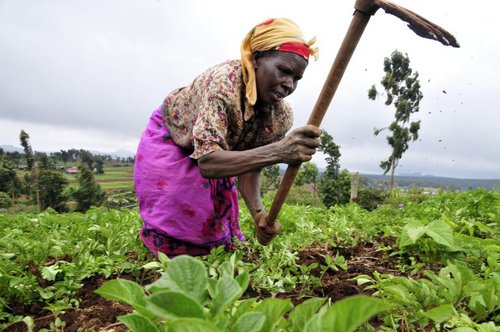 Renée Giovarelli of Resource Equity argues that Prindex not only tells us something about how we can improve women's land rights, but helps us to think in a new way about development. This piece was originally published on Duncan Green's blog, From Poverty to Power.

A couple of weeks ago Duncan asked a question: How do we, in the international development community, recognize and work with (let alone measure) issues like love, shame, fear, solidarity?

As an advocate for women’s land rights, this question resonated with me. Whenever I hear from women about the fragility of those rights and their efforts to strengthen them – as I’ve done across 16 countries and two continents – these facets of the human condition are ever present.

Fear and hope – attitudes to the future – matter because they determine how we behave. They might inform decisions about investment in land, and about families: decisions that can shape lives, communities and economies.

As for measuring these qualities, I might have the beginnings of an answer, found in a report released this week by Prindex, a new international survey which asks men and women how they feel about the security of their rights to stay in their home and continue to work their land. It’s a joint initiative of the Overseas Development Institute and Global Land Alliance.

Prindex found that 1 in 4 people fear losing their homes or other land. That’s remarkable in itself.

What’s more, Prindex found that women were, on average, over 12 percentage points more likely than men to express fear for their right to retain their home in the event of divorce or the death of their spouse. This is a land rights gender deficit.

That matters for women, and for their societies.

It is so often women who remove rocks from land, plant, fertilize, weed, and harvest crops, care for children, care for the elderly, cook, clean, carry water and wood, and all the rest without earning any money.

Women are less likely to invest sweat equity in land that does not belong to them and over which they have no ultimate control. For example, one study found an increase in investment in soil quality when women’s land rights are more secure.

If their contribution is not valued in a divorce, they are likely to receive much less than their husband, who is usually the traditional money earner.

This affects many more women than those who actually divorce. It includes women that are toughing it out. How many women are in abusive or harmful relationships who cannot leave because if they leave, they leave with nothing—no land and no money?

In Uganda, the Prindex survey shows that 40 percent of women are insecure about their rights to land in the case of a divorce. This tallies with one of my findings from years ago. In focus group discussions in Uganda, women openly talked about being beaten before the harvest so that they would return to their family for a while and their husbands could harvest and sell the crops before going to bring them home. In rural India, where Hindu women who divorce are regarded as a shame on their families and where women often receive nothing in a divorce, women talk about having to stay in extremely abusive situations because they have nowhere else to go.

So, where does this leave us? Prindex’s gender report shows that there is no one single solution, and that the long-term work of changing norms is key. But one finding in particular caught my eye.

Comparison of tenure insecurity of women in a divorce scenario and whether the law provides for equal access to nonmonetary contributions (purple = yes; orange = no)

Countries where women display relatively low rates of tenure insecurity in divorce scenarios (30% or below) are all countries in which the division of property benefits both spouses at the time a marriage is dissolved.

There are countries such as Liberia, Mozambique and Burkina Faso in which divorce legislation is gender-equal but women anticipate more insecurity in divorce scenarios. This may reflect differences over whether women know of their legal rights, and whether their personal and social circumstances along with the de facto operation of courts allow them to enforce that right.

That’s another reason why Prindex asks – and we should all ask – about perceptions: because they may reflect the reality more than the laws as written in statute books.

Asking about fear and hope becomes a way to recognise that what appears to be a land law issue is also a family law issue and an issue of norms, courts, and citizen awareness. If we don’t ask about perceptions, and if we don’t make sure that we collect data from women as well as traditional heads of household, we risk neglecting a large part of the picture, and at least half of the population.

Renée Giovarelli is Senior Gender Advisor and Lawyer at Resource Equity and an expert on women’s land rights. Prindex is the largest international survey of men’s and women’s perceptions of their land and property rights.