Prindex at the World Urban Forum: many gaps to fill 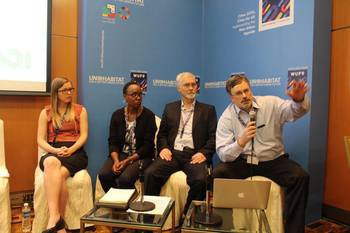 The World Urban Forum in took place in Kuala Lumpur earlier this month with several thousand participants convening to discuss the theme of "Cities 2030 – , Cities for all: Implementing the New Urban Agenda”. As I participated in the many sessions and side events I ended up with four big takeaways about the challenges we face in actually creating cities for all, and how Prindex can help to make progress on each one.

Land continues to be the core issue in urban development. The challenges around land – tenure security, sustainable spatial planning, inclusive markets – continue to be the key unresolved issues in achieving socially inclusive and economically dynamic urbanization. By revealing the actual levels of tenure security and insecurity that citizens perceive, Prindex provides a fundamental data source for making these often invisible issues visible. It creates a stronger basis for informed, evidence-driven discussions between citizens, governments and researchers.

I was particularly struck by the role Prindex could play in solving the problems raised by Billy Cobbett, the Director of Cities Alliance at the start of the Forum. He said that while the last twenty years have featured lots of advancements, we are not making progress fast enough on secure property rights or spatial planning so that they can keep up with the pace of informal urbanization and the resulting challenges. Planning and inclusive formal land markets are playing catch-up to informal settlement and informal markets which risks locking in a huge set of social costs if these processes cannot be reconciled. With projections that urban populations will grow by 2.5 billion people by 2050 (with nearly 90 per cent of the increase concentrated in Asia and Africa), we can be sure that business as usual will not meet these challenges.

Cobbett made a call to action for a new level of engagement around the politics of land from all stakeholders, a robust and continual stream of data on the land situation in cities, and a new level of attention to planning. The data gaps that will allow us to identify the location and nature of the needs are still enormous and so far are only being filled on a case-by-case basis. Prindex is an important new part of the enormous effort needed to fill this data gap.

2. Amplifying the voices of grassroots activists

PRIndex is also a tool to help grassroots activists make their voices heard on a national scale. Grassroots activists are doing great things in many places to secure property rights and upgrade living conditions, often led by women, but they still seem to lack sufficient visibility and connectivity to political structures to generate the speed and scale of change needed. Prindex helps bridge this gap.

I saw the potential for linking local data and Prindex’s national level data at the launch of Slum Dwellers International’s new book on the Know Your City campaign. It was a joyful moment led by women community leaders from all over Africa and South Asia. Know Your City's approach demonstrates a new level of robust, community-level data gathering to create a shared base of knowledge for building accountable coalitions of community members and local governments. The Asian Coalition for Housing Rights – again mostly represented by women community leaders – also demonstrated an impressive array of tools and approaches to securing land rights and developing communities. Yet the political take-up of these initiatives and models by national governments, local governments, media and the private sector still seems quite limited in relation to the scale of the challenges. Prindex, as a new indicator, can be an important part of the efforts to change this. However, it will take a concerted global effort that builds on these on-going success stories to bend the curve towards greater security and inclusivity in the timeframe of Agenda 2030 – and looking further ahead by 2050, when billions more urban residents will require property rights.

Prindex can help motivate institutions to close the gap between the promise of technological innovation and reality of the still-limited adoption of these innovations. Technological developments seem to be running ahead of the ability of institutions in many countries to use these developments effectively to resolve urban land problems at scale. I saw a lot of great technology on display at WUF – such as the array of sensors and processors associated with Smart City initiatives, and some great geospatial applications to map and document property rights. But here again I sensed a disconnect between these developments and the institutions in charge of basic things like protecting property rights and providing infrastructure, alongside a failure to incorporate the giant informal sector into the coverage which these technological advancements can provide. I think this is largely a problem of a lack of incentives to individuals in these institutions to be more responsive to these needs and the means available to meet them. Having new data on citizens’ perceptions of tenure from Prindex will give these individuals and institutions the opportunity to become more accountable and agile in delivering these fundamental services. We can help change the balance of incentives and lead to greater adoption of innovative technology for securing rights.

Finally, Prindex has a role in helping to close the gap between the informal land sectors and the financial and infrastructure sectors. If policymakers are given the means to show increasing perceptions of security in their country, this can improve the investment climate and facilitate all manner of investment into the big base of the pyramid in housing and urban infrastructure sectors – i.e. the poorer, peripheral parts of cities. Making progress on secure land rights, building bridges across the formal-informal gap, and generating credible long-term, inclusive spatial planning in growing cities is the way to address this challenge. This is where we can bring in the kind of new public and private investment needed to address the urbanization challenge at the scale needed. Prindex is playing a growing role in helping all stakeholders involved in this process understand the scale of the problem and as we scale up we’ll help track which approaches will help us solve the problem.

To get the latest updates on Prindex and receive our quarterly bulletin, sign up for our newsletter.