The Glasgow Climate Pact and land rights: the good, the bad and the ugly 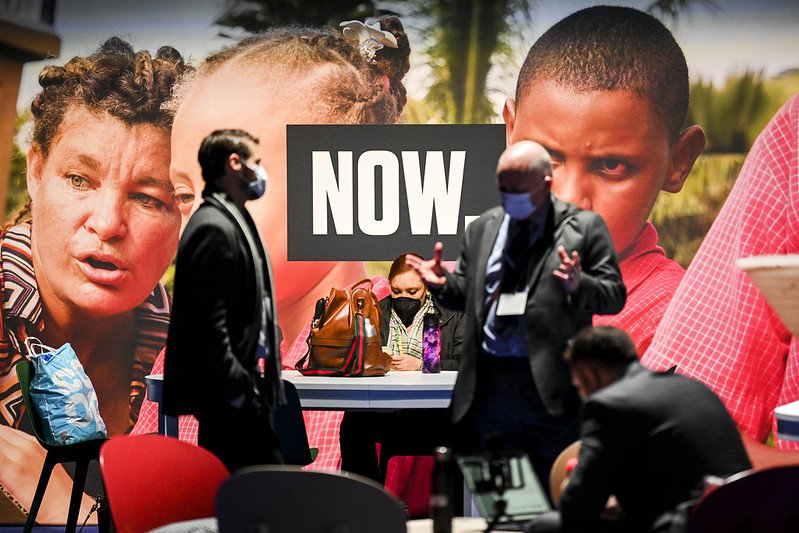 Prindex Co-Director Anna Locke and Researcher Lizzy Tan break down the summit’s final text after their time on the ground at COP26.

The mood is mixed coming out of Glasgow. There’s relief that the world didn’t step back from the 1.5°C goal and that rich countries will provide more climate finance. There’s delight that the check-ins on progress will now happen every year. There’s resigned acceptance that the coal phase out was phrased down to make it into the final text.

But there’s real frustration and fear as well.

The Glasgow Climate Pact is a half-step in the right direction – in a best-case scenario, it still only gets us to 1.8°C of global heating. There’s still so much to be done, so much that’s been kicked down the road to the disappointment of millions of onlookers who had pinned their last hopes on COP26. So, here’s our take on the good, the bad and the ugly in the summit’s legally binding final text – and what we should all do next to make sure COP27 delivers.

Nature made it into the text…

…and not just the preamble this time.

There was a great deal made at this year’s COP across various sessions and meetings about the need to integrate our approaches to tackling biodiversity loss and climate change. This is a welcome shift in rhetoric, which was reflected in the Pact: the preamble reiterates the Paris text on protecting ecosystems, forests and biodiversity and the main text emphasises the need to conserve and restore nature to achieve the 1.5°C target, acknowledging the role that land and forests play as carbon sinks.

Perhaps for the first time, this COP clearly understood that nature and climate are intertwined and must be tackled together as they also have implications for climate justice. Indeed, how people use land (to live and earn money) is the key link between the UN’s biodiversity and climate conventions. Speaking at a side event at COP26, Eduardo Mansur of the FAO said at least seven of the 21 targets in the Post-2020 Global Biodiversity Framework were ‘deeply linked with carbon neutrality in land and agricultural sectors.’

The text refers to Indigenous Peoples and local communities (IPLCs) as ‘stakeholders’ key to achieving the Paris goals. There are four references to IPLC importance in ‘addressing and responding’ to climate change, including that they should be involved in the design and execution of solutions, drawing on their ‘culture and knowledge.’

This sets them up as active contributors to climate action rather than mere passive victims, but begs the question if they will be on par with other stakeholders like governments. While it’s great to see that IPLCs will be included in decision-making on how to tackle climate change, it’s still not clear how and to what extent. We also don’t know how the substantial funds pledged to support IPLC rights will be split between these stakeholders.

No mention of indigenous and local land and resource rights

Land – and the right to use it and its resources – is not mentioned in any of the commitments. This is a missed opportunity considering how important land rights are to achieving the Pact’s priorities. Of course, the forests and ecosystems talked about in the text are really all about land. To stay invested as environmental stewards, IPLC groups need to have their land and resource rights recognised and protected.

Indigenous Peoples represent about 5% of the world’s population but they manage 20% of the world's land and 80% of its most biodiverse areas. As long-term occupants, they already have the right to stay and continue to care for land essential to meeting our climate goals. But with so little recognition and protection of these rights, they can be snatched away in a heartbeat, which can reduce the incentives for them to invest in the future of their lands.

So what do we as researchers, funders and activists do with the mix of emotions stirred by the final outcome of COP26?

As a bare minimum, we must make sure that what was announced in the many press conferences at COP amounts to more than good PR for governments. We need to check (and hold nations and funders to account) to ensure the money and support reaches the people who actually make things happen. And we must stand up for the principles of a just transition espoused in the Pact.

We also need to keep up the pressure for high ambition to prevent a backwards slide on the Pact’s goals. Anything less than a 1.5 degree goal risks putting us on a path towards catastrophic and irreversible global warming.

A key part of raising ambition involves target-setting, monitoring and accountability. We can contribute to this by providing evidence, proposing measurable targets and advocating for their adoption. More transparency and accountability is needed throughout the system, and that’s where civil society holds its strongest cards. We can provide the data, ensure fair participation, and ramp up the pressure to act.

We especially need to monitor the money; who gets it, what activities it covers, how it’s affecting climate outcomes. Take the $1.7 billion pledged to support IPLC forest tenure rights as an example. How much of this is new money? How exactly will it accelerate the recognition of their rights? How do we check if it’s working? Once we know what works, we can showcase effective approaches and scale them up quickly.

One thing that struck us at COP26 was an indigenous activist who said they felt invited to listen, not speak. Those of us with power and influence, mostly thanks to where we were born, need to leverage this power to raise the voices of people on the climate frontlines kept outside negotiating rooms (at COP and in government offices around the world). We also need to allow young people into our political systems, as it’s their future we’re talking about.

Disappointment at the Glasgow Climate Pact after two weeks of encouraging noises at COP26 may cause large sections of the public to lose faith in the whole UN process. They know that this kind of incremental progress won’t cut it. Yet the shifts seen this year on indigenous rights and forest finance suggest that public pressure is working. Now is the time to double down and ramp up this pressure, year-on-year. There simply is no other option.